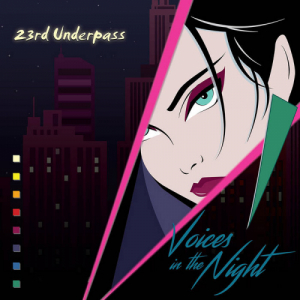 8.0
"Great"
N/A
Electroracle
Released 2019 by Nadanna
Electropop, Italo Disco
If you follow Italo Disco you are probably in your 40's, 50's and 60's for sure. Artists like Koto, Fred Ventura, Ken Laszlo, Alberto Carpani, Fockewulf 190, Tom Hooker and even Den Harrow (sorry Tom Hooker) found ways to intrigue audiences with infectious dance beats, memorable choruses and top notch production on a zillion 12" singles. Old school Italo Disco may not appeal to everyone, but there are many artists expanding the boundaries of creativity routed in the Italo Disco world. Tobias Bernstrup seems to be one of the more modern torch-bearers of the Italo Disco scene with a diverse catalogue dating back 20 years or so. Tobias was/is never afraid to experiment with sound and style.

Another torch-bearing artist that comes to mind when modern Italo Disco is mentioned is the Greece based 23rd Underpass. We have covered them extensively on the site over the years. They were the inaugural release on Nadanna Records back in 2014 (Real Life) and followed up with another album in 2015 (Faces). 2018 unveiled Voices In The Night LP and 2019 released Faces and Voices In The Night on a double CD. For this review we will focus only on Voices In The Night since we have already reviewed Faces years back.

23rd Underpass find ways infuse darker elements into the music that may have opened Italo Disco to a new unsuspecting audience. The foundations are heavily set in the Italo Disco's past while an undercurrent of darker machinations is at work that sets it apart from what the pioneers typically did. I'm completely intrigued by this approach because a lot of the blatant hero worship that goes on in music today begins to feel like a canned formulaic tribute that bores the hell out of many of us. That stuff has its place and its audience, but I rarely find value in that. I'm usually at my happy point when an artist ventures down unmarked roads and finds new ways to get to their destinations, always exploring always seeking to top the previous route. That's what 23rd Underpass does.


23rd Underpass is Costas Andriopoulos. He is the driving force behind the Greek Italo fueled synthpop outfit. Costas is responsible for all of the beautiful music you hear, writes most of the lyrics and performs vocals on a few tracks as well. The man possesses a lot talent and lets it ride every time 23rd Underpass releases new music. Nadia Vassipoulou has a heavy presence on all 23rd Underpass releases providing much of the vocal work and even her image on the cover of the original Faces LP. John Britsas and Panos Papapetros also add their vocal talents as well.

Voices In The Night  title made me think of punk legends Agent Orange. Could this be an Italo Disco cover of this classic Agent Orange track? Well, it is not. In fact it is so far from, I'm a dork for even referencing it, but I love the song. Thankfully, 23rd Underpass delivers a masterful flurry of tantalizing synths and pumping BPMs on their latest offering. 23rd Underpass knows how to take you away with their mystical rhythms that connect and blend the Italo Disco realm with the synthpop realm forming a hybrid sound that yearns for attention to a near flawless outcome.

The band invites many different performers to add their talents to the album. One guest vocalist is Panos Papapetros. His vocals on "I Hear Voices In The Night" and "Together Forever" build a powerful collaboration combining beautiful synths and smooth vocal melodies worthy of adoration. "Together Forever" also features long time contributor Nadia Vassilopoulou sharing the vocal duties. Nadia's vocals and song writing talents are an asset to 23rd Underpass. Her voice stands out and captivates our attention on every track she is involved with. "I Feel Alright" and "You And I" are solid examples of how one artist compliments the other. This dynamic has been present since Real Life came out 6 years ago. I always thought of Nadia as a permanent member of 23rd Underpass since her contributions are quite prolific.

Another collaborator on the album is vocalist John Britsas. His vocal assignment on "I Believe" takes more baritone direction. His deeper voice compliments the diversity of the whole. The order of the tracklist flows nice to back up the previous statement. You get a nice mix of vocal styles. Nadia has the most appearances with Costas ("The Chase" and "I Feel Alright"),  John (" Believe") and Panos ("I Hear Voices In The Night" and "Together Forever") mixed in.

A few remixes round off CD1. Most notable is the Flemming Dalum remix of "A Chase". The mix adds some different sounds that add a nice alternate feel. More often than not, his remixes are the best remixes. He brings his signature style to the forefront. Tobias Bernstrup and Bunny X had the FD treatment last year. Both artists are top notch on their own. When you see a Flemming Dalum remix credit, first you know the artist is worthy and second the remix will be amazing! Over the years I have grown very fond of Mr. Dalum's work as an artist and producer. He is ultra connected to the Italo scene and his work dates back 40 years at least. Every once in a while he'll post a picture on FB showing a part of his vast record collection and each time my jaw drops with vinyl envy.


With the CD release you get a bonus seven plus minute remix of "Faces" by electro synthpoppers Nine Seconds. Nine Seconds features the mighty Oliver Spring known for his time with industrial legends Sleepwalk. Along with Rene Ebner and Thomas Kowalzik, the trio builds an electro frame for this track, pushing it away from Italo just enough to reveal a new face and feel from the original. Nine Seconds just released a very intriguing cover album on Infacted called That Perfect Beat Will Tear Us Apart. You will find reworks of classic Joy Division, Fad Gadget, Trans X and many others.

Aside from the Faces tracks, there are a few additional tracks tossed in for the 2CD release.  "Re Flexx" is an instrumental and previously unreleased and "The End" was added to CD2 due to space issues on CD1. It was actually part of the Voices In The Night sessions.

Just as a reminder, we already reviewed Faces years ago, but it couldn't hurt to mention that Faces remains a brilliant follow-up to the debut Real Life. It offers everything one would expect from 23rd Underpass. It ,like any release can serve as a perfect introduction to a great up and coming artist.

No surprise here that Martin Bowes did the amazing mastering job at his Cage Studios. Martin's name is synonymous with mastering as well as his long running Attrition project. Oleg Galay of Other Voices Records is responsible for the standout artwork. He is also responsible for a few Attrition releases on his label.

2020 has turned out to be a complete shit show. At least we have music to help us through. Sometimes it's a nice mix of old school punk, other days some blistering 80's German thrash metal is what hits the spot. I'm thankful for artists like 23rd Underpass that help ease the burdens of living in a world on the precipice of extinction. Most of 23rd Underpass physical formats are still available. Good luck finding the You'll Never Know / Sometimes 12" from 2009, but just about everything else can be found. Turn off the news and turn on some 23rd Underpass instead. You will be glad you did!

Poponaut
23rd Underpass - Real Life is available at POPONAUT from 16,45€