Scary Stories to Tell in the Dark Steven Gullotta
I’ve the slightest idea as to why Scary Stories to Tell in the Dark released during the beginning of August 2019; the setting of the film takes place on and after Halloween night to begin with so the spooky PG-13 tale would have been a delight to be seen during October. Perhaps it was to avoid competition with other big name horrors coming out between this month and next (specifically speaking of It: Chapter 2 and Doctor Sleep the latter of which is set to be released in late October). Nonetheless, this off-time released and thrilling movie is a perfect blend of horror, mischievousness, and a story that will likely become an all time Halloween classic.
For those that don’t know (and for that those that do, you can skip this paragraph) Scary Stories to Tell in the Dark is a series of books written by Alvin Schwartz. While these books terrified me when I was a child reading them nowadays gives me a slight laugh and a basic sense of nostalgia. Revisiting these books in preparation for the movie, however, did provide me with enough ground to get up and running on the movie.
The 2019 film directed by André Øvredal, who made his name with the dark fantasy film Trollhunter, Scary Stories to Tell in the Dark follows the trials and tribulations of a group of at-first skeptical friends who awaken a tortured spirit. This spirit writes stories in blood in her book which revolve around our high school characters – and then these stories slowly but surely come true.
The opening of the film is what sucked me in the most; it shows off a group of friends getting together for a final Halloween night on their senior year of school. They are Stella (Zoe Colletti), August (Gabriel Rush), and Charlie (Austin Zajur). This is set to the song ‘Season of the Witch’ by Donovan which is hysterical as it goes from location to location of the three getting their costumes on and annoying their siblings. Charlie finds it in his heart to play a prank on the school bully Tommy (Austin Abrams) and shit (literally) goes flying. The characters were described as easily as can be in this set-up; even when they meet the loner Ramón (Michael Garza) does both the script and the director explain his character well enough.
The acting within the film, while not Oscar-worthy and definitely not anything to get extremely hyped up about, was very well done. For a crew of mostly young, no-name actors, each cast member was put to use to fill out their roles in the film. Zoe Colletti as Stella took center stage as the film’s main protagonist and had a growing love interest with Michael Garza’s Ramón Morales. This was never explored using stereotypical romantic tropes but was very much organic; through each encounter they survived, each one of them grew closer to the other. To me, these two were the best the film had on offer if only because they had the most screen time and had good character arcs of acceptance and truth.
The directing within the film was good for what it was; I can’t say there were any specific shots where I was blown away or amazed. That being said, there was never a scene in the movie where I felt as if it was jumbled up or confusing. If there is one thing I can praise André Øvredal for it would be his pacing. Most of the film moves at a rapid rate, but when the horror kicks on he pauses the action, allowing every element of suspense and thrill to creep into your skin.  I can mainly reference the scene in which The Big Toe short plays out; as August eats a pot of chili, he crunches onto a toe and is repulsed. He hears the infamous whisper, “Where is my toe?” He attempts to hide underneath his bed but rather than immediately having the horror appear, the director ramped up the tension by allowing August to slowly peak up and out of his position. It’s only after what seems like a long, long time that August meets his fate.
With all that said, there are a few minor complaints when it comes to the story and scriptwriting. The story of Sarah Bellows' tortured soul and her history is told extremely well to the point where I felt sympathy for what she went through. However, there were a couple of odd choices. In the beginning of the film, the bully Tommy was set-up to be a big bad and I actually wanted to see him confront our heroes multiple times throughout the film. The threat of the stories coming to life and a bully would have made for even more frantic horror. Nonetheless, he’s the first to be wiped out (though in an admittedly awesome fashion). There’s also the fact that the script attempts to push out a story about how Stella’s mother left the family and how Stella blames that on herself. While it’s eluded to briefly in the movie and there’s a sobbing sequence between her and her father over the phone, that bit never bore any fruit.
But even with these complaints, I find them minor in comparison to the creativity on display with Scary Stories to Tell in the Dark. It’s an imaginative and fun way to transfer classic stories I and many like me fell in love with as kids and I was shocked as to how awesome it turned out to be. This is going to be a must watch for me these coming Halloweens and will surely be looked upon as a classic in years to come.
September 7, 2019 https://www.brutalresonance.com/movie/scary-stories-to-tell-in-the-dark/ 450 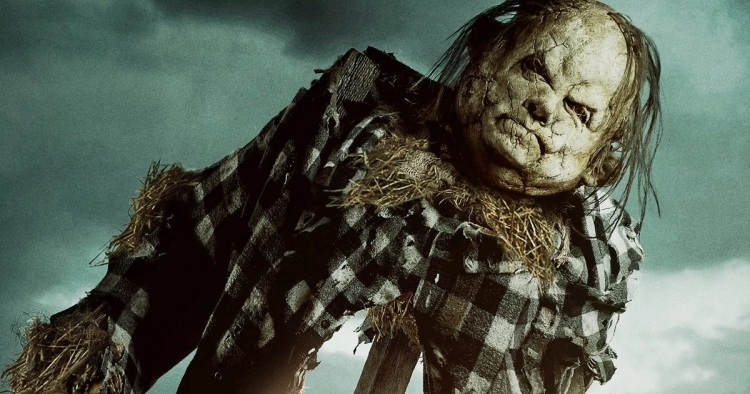 Scary Stories to Tell in the Dark

And Also The Trees - Born Into The Waves is available at POPONAUT from 15,95€

I Spit On Your Grave 3: Vengeance is Mine